The logo for the 25th company anniversary has been presented

The 1st of April the celebrations for the 25th company anniversary have officially started. Celebrations will end with a big event, actually under development, which will take place in the factory site in June. Celebrations have started with an internal event in which the senior management presented to all employees the new logo created for the anniversary. 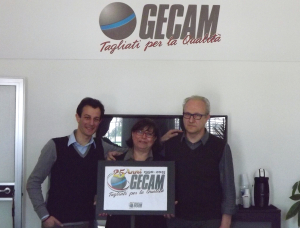 Presented by our CEO Daniele Camisa, the brand preserved its original features to which have been added a commemorative lettering and the tricolor flag which wraps the “world”/”ball” remarking the Italian nationality of the company. But Gecam also faces the international market, last year was signed the partnership with Gambit, an important foreign producer of gasket sheets.
Since its establishment some essential values such as family, friendship, and human relations are at the centre of the entire business project. Today, after 25 years of activity it is important to celebrate the same values which have allowed Gecam to reach important goals with confidence and optimism.